The Rise of University Microgrids 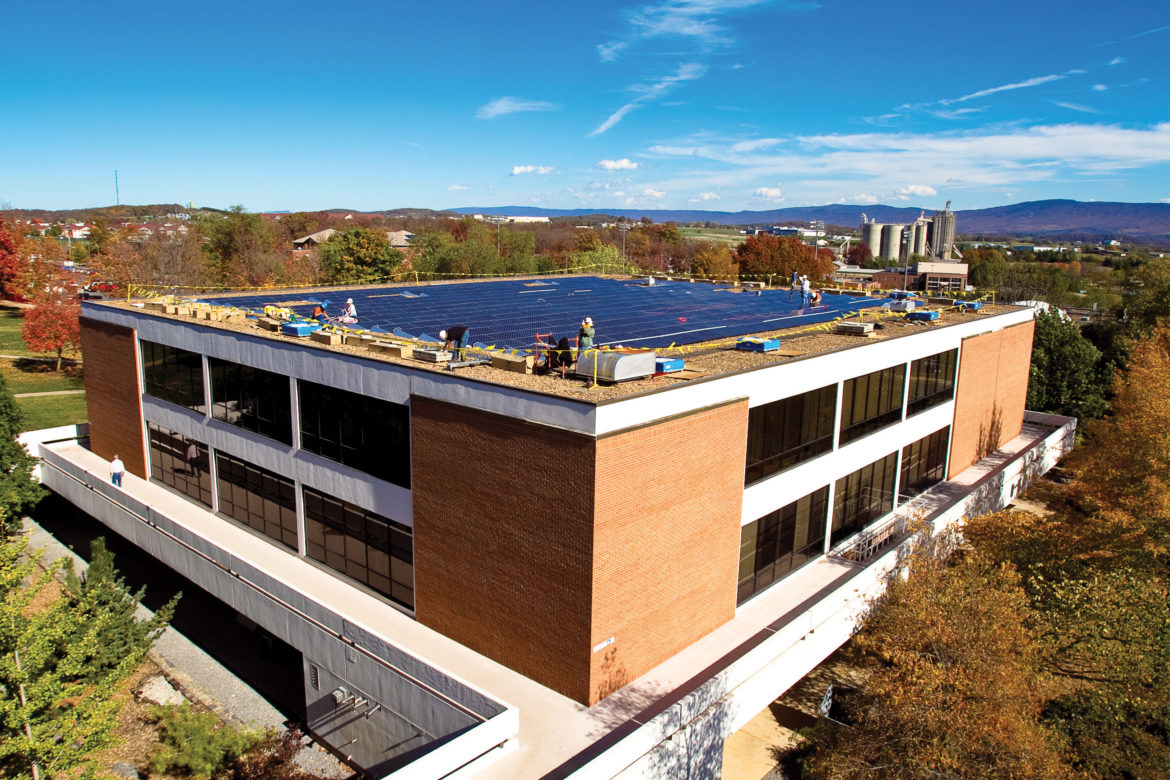 This saying exists for a reason: The one thing everyone does agree on is that there’s not necessarily a “standard microgrid." By definition, each project is designed and engineered to meet a specific customer’s set of requirements.

That customer base includes a growing number of colleges and universities attracted by the ability to generate their own power needs, among other benefits offered by the self-contained systems.

Schools such as UC San Diego, MIT, Montclair, Princeton, and Santa Clara University, have stepped up to the call for greater resiliency. Although the microgrid industry is relatively young, it's popularity is growing in higher ed...

So, What Is A Microgrid?

The Department of Energy defines a microgrid as: “a local energy grid with control capability, which means it can disconnect from the traditional grid and operate autonomously. A microgrid, for the most part, operates while connected to the traditional grid but can break off, or island itself, and operate on its own. It can be powered by distributed generators, batteries and renewable sources.”

Essentially, these energy systems are capable of balancing captive supply and demand resources to maintain stable service within a defined boundary. 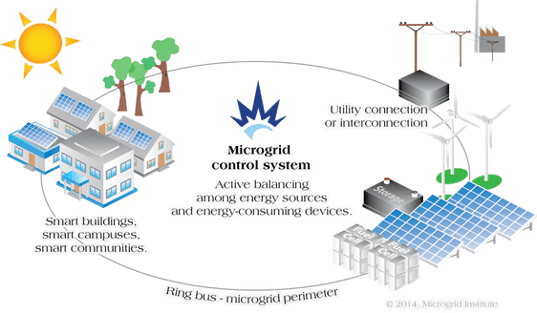 Infographic via the Microgrid Institute.

A recent report from the Environment America Research & Policy Center revealed that microgrids are becoming increasingly common on college campuses. The report also gives insight into why institutions are such excellent candidates to develop microgrids: their already self-contained nature, long-term investors, 24/7 energy needs, and abundant space available (rooftops, parking lots, etc.) are just a few that top the list.

Michael Burr, Founder and Director of the Microgrid Institute, explained that due to his former job as editor of a utilities magazine, he’s had a pulse on the concept for decades.

“The concept of distributed generation was a curiosity in the late eighties, but was considered something that would be ‘20 years away' forever,” he said.  “Fast forward to the early 2000s, and I notice that utilities were beginning to worry about distributed generation. They viewed it as a really serious factor for the future, no longer a curiosity. The same forces were at work in microgrids.”

Concerned by the prospect of a battle over the political questions, Burr set out to create an organization focused on charting the path forward. The Microgrid Institute was born.

Burr shared that the increasing number of campuses pursuing microgrids is spurred by research and development that has led microgrids to a point of relatively mature technology. 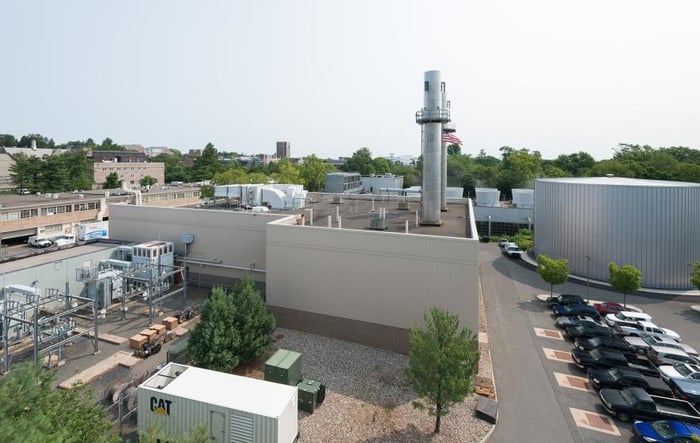 He believes this rising star is also a matter of tech proliferation.

“By nature, universities are interested in learning about technologies, so it’s logical that many are interested in microgrids as an energy system not just to meet their needs but also showcase their commitment to innovation,” he said.

Resiliency is another huge draw for universities, especially in the wake of Hurricane Sandy in 2012, and most recently, the devastation from Harvey, Irma, and Maria.

Brief brownouts, let alone blackouts, are highly detrimental in the event of extreme weather, where universities are looked upon to be strongholds for the community. The threat of cyber attacks is yet another push. The ability to operate independently from the central power grid is invaluable in the face of disaster, as proved by Princeton’s resilient response while half a million people lost power during Superstorm Sandy.

According to Burr, the most common misconception is that microgrids are just highly efficient and sustainable local energy systems. He emphasized that a microgrid is “differentiated due to the ability to island and separate itself from the utility grid and operate independently in a self-sufficient way.”

Confusion also persists on what a microgrid is not; a community solar garden, for one, or solely a backup generator.

“While backup generators operate rarely, today’s advanced microgrids are working 24/7, 365 days a year for some purpose,” Burr explained. “A backup is a waste of money until you need it. A microgrid makes use of the capital assets and generates value. And microgrids pay for themselves over time, so it’s a return on investment.”

The overriding concern for universities, unsurprisingly, is cost. The value of a microgrid isn’t always easy to calculate in dollars and cents--which is why it’s essential to look at objectives, and the most cost-effective way of meeting those.

“Not every building has an equal need for resiliency, so there may be no need to make the entire campus an islandable system. Many energy managers have a very clear idea of what their energy loads look like, but not how to bring resiliency to the specific ones that need it,” Burr said. “A university shouldn't look at it as an all-or-nothing path.”

While there are a couple of ways that microgrids reduce a university’s carbon footprint, it’s important to note that they're not synonymous with clean power. By definition, microgrids are a control system, not an environmental one. However, by incorporating renewable sources of energy locally, many universities are using microgrids to meet their sustainability goals.

“The design process involves looking at energy usage, and in the process you find ways to gain better control of it, which means shifting loads to when they can be served by renewables, modulating loads to manage short-term peaks, shifting to a different time of day and reducing the use of ‘dirty energy,’” Burr explained.

Eastern Mennonite Goes Off the Grid

Eastern Mennonite University, a private liberal arts university in the Shenandoah Valley, is in the final stages of installing their microgrid, which will be able to power the school’s 650,000 sq. feet of buildings upon completion in early 2018.

The microgrid will consist of three, 500-kilowatt natural-gas-fired generators, enabling EMU to provide for their own power needs if need be (with the help of a solar panel array located on top of the campus library).

Director of Facilities Ed Lehman explained that their interest stemmed from significantly lowered distribution demand charges and long-term value. Plus, they benefit from lower power demand when the local utility is experiencing significant demand. Lehman projects that the microgrid will save about $7.00 per kW on the distribution demand fee.

The decision came from a combination of recommendations and economics, after entering into a performance contract with Siemens Building Technologies to work on energy-saving capital improvement measures.

Siemens completed a study for the university looking at their peak times and dates as well as the peaks for the local utility. In a year’s time, there were only two days when the peaks were coincident--meaning that the rest of the year, the monthly peaks were different.

“What this means, is, we can make a contribution and help them as they help us. In 2014-15, only two days were concurrent; the rest of the time we can make a difference,” Lehman said. “It made sense for us to go this route, in order to get a reduced day-to-day rate on the electric power purchase. The microgrid will also be available to assist the local utility when they see one of their peaks coming.”

Lehman stressed the value of conversations with the utility both early and often in order to have a solid understanding of their needs. He said that it’s equally essential to be familiar with your internal needs.

“You must have a good grasp on your own needs to keep your load profile and minimize costs to see what’s most beneficial,” he said.

Who Pays for Microgrids?

When it comes to coughing up the dough for microgrids, there are several different financing mechanisms.

Unlike net-metered energy systems, where it’s a straightforward mechanism and therefore easier to make a business case, microgrids require you to put a standard dollar on resiliency--which isn’t an easy task.

“What we’ve seen is a lot of work to put dollar figures on what resiliency is worth, to value the ability to withstand a large utility outage. It has to do with the cost of an outage,” Burr said.

For some industries, this is a no-brainer. For instance, in a hospital or nursing home, the stakes are life-and-death.

“Each university has to think about where they need resilient power on their campus and why that’s so valuable, and it might be an entire island microgrid," he said.

There’s also a big difference between a microgrid owned and operated by a utility and by an energy user. The utility can justify the costs it incurs for serving customers and can fund some microgrid investments as part of its rate base. This is less likely to happen in a college campus scenario, where it’s more probable that the institution or a third-party private vendor owns and operates the microgrid.

Burr believes that public-private partnerships can be an excellent way to finance microgrids, and the P3 approach can help communities and colleges work together on complementary goals. A microgrid can be part of a community-wide strategy to improve resiliency and public infrastructure, reduce carbon footprint, and save money.

“A microgrid that’s part of a P3 can accomplish more than what the college can do on its own. Colleges want to engage with the community and be good neighbors, plus promote what they’re doing to attract students,” Burr said. “It’s worth pursuing for the dividends it can provide.”

He stressed the importance of entering a durable partnership at the outset by clearly defining objectives and limitations.  Burr discusses these strategies in-depth in his article, “How Not to Shoot Yourself in the Foot: Smart Planning and P3s.”

At the end of the day, Burr believes a broad-based P3 approach, with a focus on stakeholder engagement and disciplined management, is most likely to yield the best possible outcomes for any community.

The Future of Energy Independence

Indeed, with the help of microgrids, tech-savvy schools across the nation are paving the way toward a more resilient future.

Want to learn more about innovative approaches and solutions for higher ed facilities? Join us at HEFF '19!