The speed in which university facilities leaders need to respond to changes and implement solutions has accelerated...big time. By the same token, resources are more strapped than ever.

This dilemma means there’s a crucial demand for universities to leverage every resource in the organization. According to Jennifer Battle, Director of Strategic Initiatives for Infrastructure Planning & Facilities (IPF) at Michigan State University, that resource is your employees.

To drive change, Battle explained that IPF had to divorce themselves from the old model--they couldn’t afford to operate with its inefficiencies.

“We needed to create an environment as leaders where we support our employees taking risks and failing--and being okay with that,” she said.

A new philosophy on leadership was put into place. Instead of just “moving boxes around on the org chart,” IPF went a step further to truly change the way the department did business.

“We now have a much smaller leadership team that acts in an advisory role and looks all across the entire organization-- decisions now happen at the business-leader level by the people who lead the departments,” Battle said.

By giving the business-leaders permission to run things “how they see fit,” the department is far more nimble. Now, the senior leadership is focused on mentoring, coaching and communication.

“Before, the model was flipped--senior leadership had tons of functional knowledge and expertise, and that’s where we spent our time. Now, the new model says we spend most of our time creating a culture for people to take risks and make change,” Battle explained. “It’s been a huge shift.”

With 40% of IPF employees retirement-eligible, the timing was right for a fresh approach to bringing in new members. The team now embraces “T-shaped employees,” a concept rising in popularity as creativity and collaborative skills are seen as crucial to success across all industries.

The vertical piece of the T represents the functional knowledge required, whereas the horizontal part of the T reflects a broader skill set (a narrow specialist would be an “I-shaped employee”). The “T” professional can think broadly to foster innovation and learns by linking up different specialties.

Battle also shared the “three golden nuggets” which have paid off big for IPF--and can be easily replicated by other departments both large and small.

The new autonomy given to employees paid off quickly for the landscape services team. When the assistant manager came up with an idea, he was able to kick off a pilot without waiting for executive-level approval.

“Instead, he was able to get things going out in the field,” Battle said. “An app was created that greatly reduced the tree-trimming costs, and we saw giant savings. The best part was all the employees started to get competitive about driving the cost of the operation down. People are happy and engaged, and that’s what ultimately drives big ideas and efficiencies.”

“Engage employees at different levels & roles-- put people together that may not normally work together.”

IPF partnered with Disney to figure out how to remove silos and create opportunities for people of all levels to be creative together, borrowing a concept called “Spartan Imagineering.”

Diverse teams were put together, from the custodial department, IT, to MSU students and faculty, to solve a design challenge where they had zero expertise. The issue at hand: determining innovative strategies to repurpose an old power plant. The project yielded tons of ideas that met the needs of the university, and the pilot was success at tapping into the problem-solving powers of people with different skill sets.

“Individually we don’t have the big solution--otherwise everyone would be a billionaire. Instead, we  each have a little piece,” Battle said. “If we just bring people together with same perspective, we’ll get a narrow perspective, rather than a comprehensive, broad solution.” 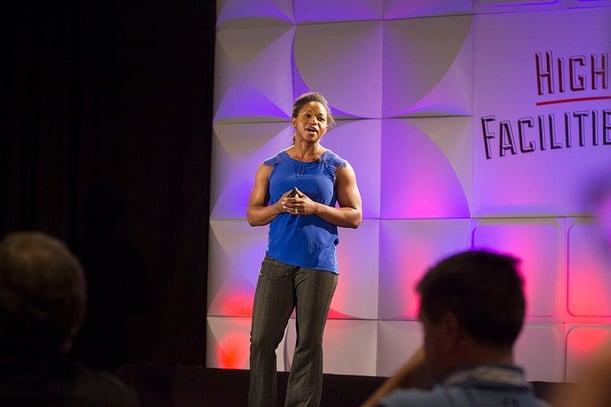 IPF also used Imagineering to solve another dilemma. While the department was receiving a lot of requests for employees to get extra training, the leaders realized they had no clue how they tracking training and development. By gathering different skill sets to evaluate this challenge, the team came back with a solution that identified $500k in savings in ways they offer training.

IPF was facing a challenge common to many facilities departments: current recruitment methods just weren’t delivering right applicant pool. An “unlikely trio” was gathered to brainstorm: an administrative assistant, a student, and a project manager analyst. Within a month, they delivered a solution that streamlined recruitment methods that saved $400k over a couple of years.

“The success of this unlikely team illuminates the importance of teams that are made up of a good mix of expertise and creative thinkers,” Battle said. “This mix creates the capacity for innovation.”

It’s not enough to have a suggestion box--there must have a way for ideas to get vetted and put into action.

What can other facilities leaders learn from the success of IPF’s approach to engagement?

It’s clear that a commitment to employee engagement is what separates agile, resilient organizations from the rest of the field. By investing in your employees, you create a powerful cultural shift that arms them with the resources they need to innovate... and create game-changing efficiencies.