Aligning Facilities with the Academic Mission at Virginia Tech

Most university masterplans have one thing in common: They’re primarily a tool for facilities and operations.

According to Sherwood Wilson, Vice President of Operations at Virginia Tech, facilities leaders must consider the masterplan as a tool to enhance the institution as a whole (while building the right relationships to do so!). At the Higher Ed Facilities Forum, Wilson shared key insights on masterplanning at its best as the traditional process was flipped on its head at Virginia Tech.

Usually, masterplans are more accurately defined as masterplan updates that roll around every five to ten years. This was certainly true at Virginia Tech, until 2014. “For the first time in our history, we did a true rethink, starting from scratch,” Wilson said.

"For an effective, physical manifestation of the university’s vision moving forward, facilities and academics must be unified.”

A couple of factors aided in the success of this rethink. 2014, the year that the new masterplanning process was set to begin, was a unique time of flux as both the President and Provost were retiring. This gave Wilson the opportunity to pause the process and instead prioritize forming a strong partnership with the new President and Provost, which he describes as “non-negotiable when it comes to creating a true link between facilities and the academic mission.”

Virginia Tech’s new President, Dr. Tim Sands, wasn’t interested in the typical static six or seven-year masterplan. He challenged the Blacksburg community to engage in a visioning process called Beyond Boundaries, which focused on conversations about the future “without constraints of today’s perspectives and perceived barriers” (i.e. “What about the deferred maintenance?”).

The result of this initiative informed the new strategic plan, “Beyond Boundaries 2047, The Campus Plan,” which offers a transformative, long-term framework for the university’s future. This plan embraces smart growth principles to allow for the only certainty we are guaranteed in higher ed: change.

Taking The Time For Innovation

The visioning process didn’t happen overnight, says Wilson. “We took an extensive look into numerous guiding questions over a two-year period: What will higher ed look like in 2047? What kind of buildings will we need and how will education be delivered?” he shared. “We constantly re-examined the ‘why’ behind each goal and initiative to measure our direction forward.”

This intensive process resulted in four key concepts, which became plan drivers of Beyond Boundaries.

“We constantly re-examined the ‘why’ behind each goal and initiative to measure our direction forward.”

One key component, Wilson shared, was “destination areas,” or transdisciplinary communities that transcend the traditional academic boundaries to tackle complex problems. Change may have been necessary but it wasn’t the overall consensus at first. The destination area concept wasn’t immediately embraced by some in academic leadership, who were being asked to transition to integrated, blended learning spaces. 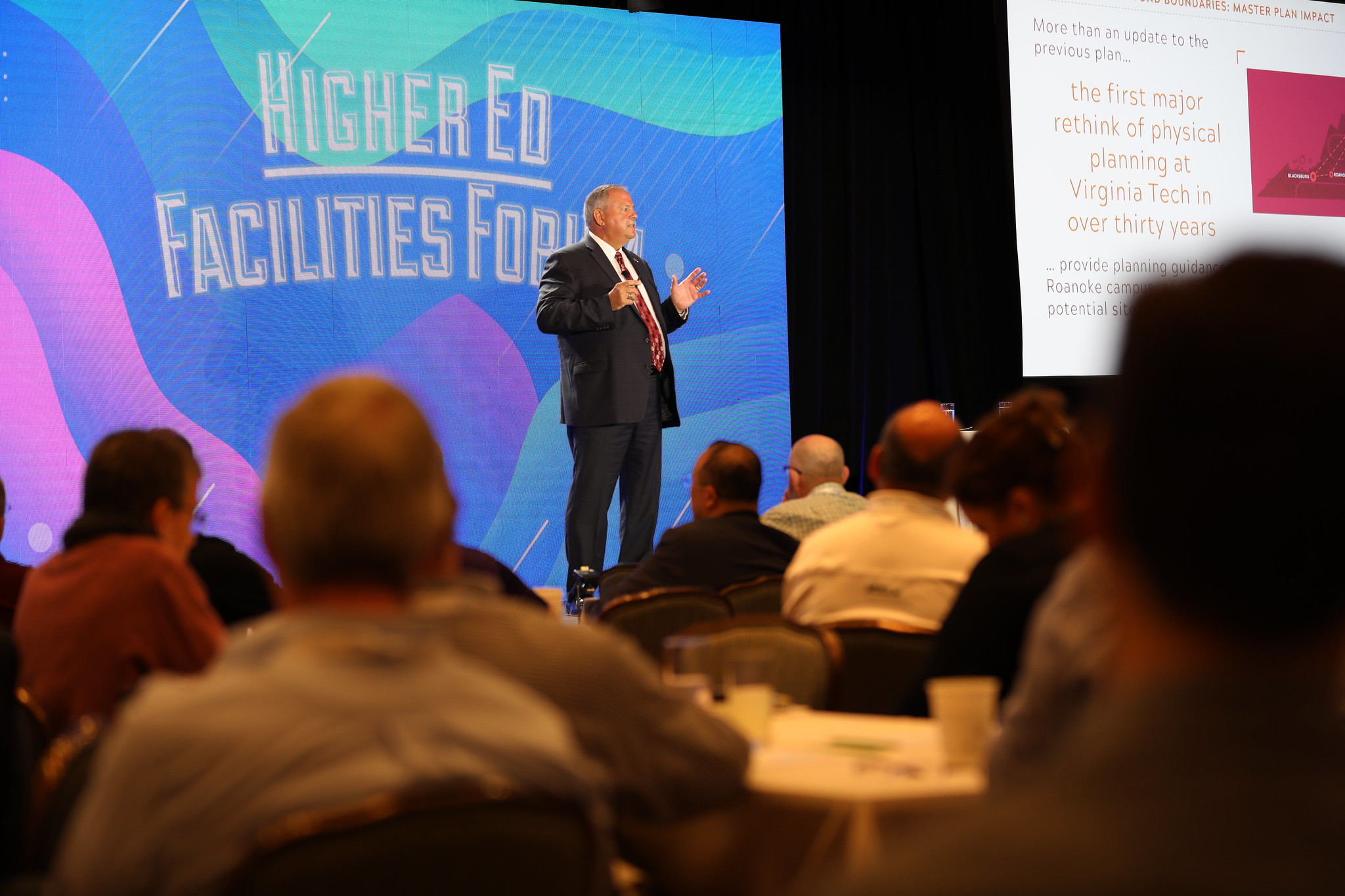 Rather than steamrolling concerns from the academic side, Virginia Tech paused major infrastructure projects and instead,  experimented with repurposing existing spaces (libraries, underutilized classrooms) into collaborative, experiential learning spaces while facilities, academic deans, and vice presidents were engaged in high-level visioning about both short-term solutions and long-term planning.

Change—even in small doses—will always draw initial resistance, Wilson shared. What carries concepts into actual implementation is taking the time to engage all parties in the solution, rather than neglecting valid concerns and the common fear of change.

Wilson turned his focus on building a rapport with departments not typically involved in the masterplanning process, such as recreation and student affairs. This aided in a deeper understanding of increased layers that facilities can add to the masterplan for university-wide benefit. At Virginia Tech, this resulted in:

The Importance Of A Flexible Masterplan

The Beyond Boundaries Plan is far from a static masterplan set in stone; Though, it’s a transformational visioning document set to propel Virginia Tech into the next generation.

While this type of long-term initiative won’t necessarily occur on every campus, Wilson maintains  that facilities execs from all universities, “can’t afford to be wed to the masterplan.”

“If we let old principles dictate how we move forward, we are doing the university a disservice,” he said. “The ultimate goal is to create a tool for the campus, not just facilities. We must break out of our silos—for an effective, physical manifestation of the university’s vision moving forward, facilities and academics must be unified.”