When Gerald Morgan started working at the University of Missouri almost 30 years ago, he got used to building things. Starting out in design services, he eventually moved over to construction management, where he spent 20 years overseeing building projects. When he became Director of Space Planning & Management in 2015, he did not anticipate the challenge ahead of him now: reducing more than one million of the university’s 19 million square feet of space.

In a recent presentation at the Higher Ed Facilities Forum, Morgan explained why Mizzou set about this mission, what it takes to succeed, and why space reduction will play a major role in the future of facilities management.

Mizzou’s space reduction initiative focuses on “Educational & General” space, or E&G space. Historically, maintenance for these spaces was funded primarily by state appropriations, with a small assist from tuition monies. (On the other hand, “Auxiliary” spaces – athletic facilities, residential life buildings – use their own revenue to fund maintenance costs.) In recent years, state legislators have appropriated less and less money for the university, leaving it increasingly dependent on tuition dollars to maintain its E&G spaces.

“As you might imagine, not knowing what enrollment is going to be like on an annual basis – that makes it very difficult for us to plan on what we're going to have to use for building maintenance,” Morgan said.

The numbers speak for themselves. Mizzou has 120 primary E&G buildings and 91 support E&G buildings, totaling 7,375,915 gross square feet. It also has an $881 million backlog in maintenance needs for those buildings, growing at an average rate of $30 million per year. Morgan’s maintenance budget for FY2020? A whopping $15.3 million. That figure represents 0.52% of the current replacement value (about $2.94 billion) of Mizzou’s buildings – far lower than the 1.5-3% that experts recommend as an ideal CRV.

Sadly, the situation at Mizzou is a common one. Enrollment declines, revenue reductions, rising costs, unpredictable budgets – these are challenges facing the entire higher ed sector, Morgan said, citing an analysis by The Kiplinger Letter, a personal finance newsletter. The pandemic has only exacerbated these issues, slashing enrollment numbers and graduating classes. “We’re hitting a period where we’re going to see that downturn as well,” Morgan predicted.

Dire problems call for bold solutions. Shortly after Morgan assumed his current role in 2016, Mizzou’s Vice Chancellor for Operations let him know that despite the university’s best efforts, state legislators weren’t getting any more generous with the purse strings.

They set a goal of reducing one million square feet of E&G space – about 10% of the university’s total – by 2024, whether by demolishing it or through divestment. This would in turn eliminate roughly $200 million of the university’s $800 million in facility needs, plus $8 million in operations costs. “We would then reinvest those dollars in existing facilities – which would be renovations – or in new facilities that could provide better-quality, mission-driven space that supports the best learning environment,” Morgan said.

He needed a few key resources to achieve this goal. First and foremost was support from university leadership; equally important was a new resource allocation model in which academic units paid for their own space, using funding that previously went into the general operations pool.

Once individual departments were made responsible for these costs, Morgan found himself fielding phone calls from deans and department heads realizing they didn’t need all their space after all. “That was critical,” Morgan said, “because I needed this space as receiving space for those folks that would be coming out of buildings that we are going to demolish or divest.”

Finally, Morgan needed good data, something he didn’t have at the outset. When he assumed his current role, he discovered that only the university's research units were required to complete a space utilization inventory – and they were only required to complete it every three years. “That's not going to work, especially when we have to identify space for the people coming out of the buildings that we’re going to eliminate,” he said.

So, he persuaded the university’s leadership to make that survey an annual requirement for every department (this is where support from the top comes in handy). “Our Vice Chancellor of Operations sends out the email saying, ‘This is mandatory. You must do this,’” Morgan said. “We have great data now.”

In addition to internal surveys, Mizzou contracts with Sightlines and ISS to conduct detailed building surveys, identify facilities needs, and develop cost estimates. These cost estimates are used to determine each building’s Facility Condition Needs Index, which calculates the building’s maintenance and repair costs by its replacement value.

Five years into its space reduction initiative, Mizzou is more than halfway to the finish line. Morgan expects that by the fall of 2022, the university will have shed 531,000 gross square feet, eliminating $112 million in backlogged facility needs. 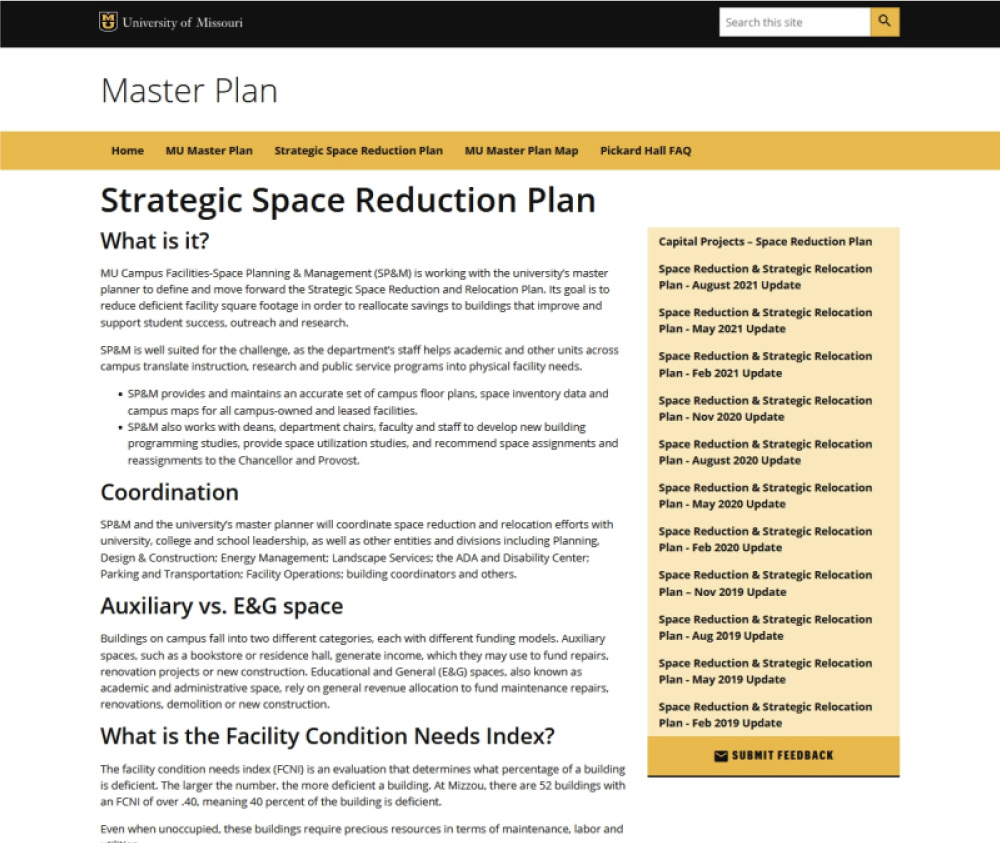 As he wrapped up his presentation, Morgan stressed the importance of ensuring that any facilities initiative furthers the university’s academic mission. “Have empathy, listen to the customer, and then be as transparent as possible during the process," he concluded. "Communication is critical."