When Mike Richter retired from the National Hockey League, the legendary New York Rangers goaltender took what some might consider an unusual career turn. After earning his degree from Yale, he quickly established himself as a leader in the clean energy space, founding the private equity firms Environmental Capital Partners and Healthy Planet Partners. Now, as president of Brightcore Energy, the U.S. Hockey Hall of Fame inductee helps businesses transition to sustainable, efficient infrastructure.

For Richter, his second act is motivated by his love of science and the planet, but also by common sense. "If you can be efficient with these resources, you're probably going to come out on top," he said. "We rely on energy now more than ever, and so we better figure it out quickly.”

During a conversation at the Higher Ed Facilities Forum, Richter discussed what his hockey career taught him about teamwork, why sustainable infrastructure is a very simple proposition once you clear away the buzzwords, and what facilities leaders can learn from his hockey career.

In his years as a championship-winning professional hockey player, Richter learned a few things about how to build and maintain an effective team. He attributed many of these lessons to Mark Messier, the Rangers captain who led the team to its Stanley Cup victory in 1994. "That team in particular found a way to make everybody in the room important," he said.

“The team wins and loses as a group. If you can foster that in any way, in any application, you're going to be better off.”

Crucially, everybody meant more than just the players. As he and his teammates celebrated their Stanley Cup win, Messier reminded them to appreciate the contributions of their equipment assistants and everyone else who supported them off the rink. “He said, ‘They’re just as much part of this victory as the top center on this team,’” Richter recalled. “The team wins and loses as a group. I think if you can foster that in any way, in any application, you're obviously going to be better off.”

Messier’s leadership style offers useful insights for facilities leaders adapting to a younger workforce with its own, evolving relationship to the workplace. In 1993, a young Canadian player named Darren Langdon joined the Rangers. When he met up with the team in Los Angeles before a game the next day, his teammates lovingly ribbed the country boy for wearing overalls while they were decked out in full Rangers gear. After practice the next morning, Langdon returned to the locker room to find a full suit waiting for him.

“Mark had hired a guy to come in,” Richter said. “Darren got off the ice, the guy measured him, pinned it up, and it was ready to roll for that night's game… All the crap we had given this kid sort of fell by the wayside. It was a really big statement. You're part of the team, you're part of our family. We need you and we respect you.”

One of the most important parts of being on a team – let alone managing one – is understanding that success comes in many forms.  “What's between my ears? What's in my heart? What am I willing to do? How am I willing to improve things? Your metrics of designing who you're going to hire and who you're not going to hire has to some way have an accounting for that,” Richter said. “Success comes in all shapes, sizes, and personalities. It's up to you to drill down and find out what is going to make that person tick, that's going make them do the extra things and buy into what you're trying to accomplish.”

Richter sees his work at Brightcore Energy as a way of empowering people and teams to succeed. He understands why some facilities leaders might be wary about investing in potentially large-scale infrastructure upgrades, which is why he likes to boil the issue down to more fundamental questions.

"I had a coach that once said, ‘Your body is your Ferrari. That's your performance vehicle. Why would you ever go to a gas station to fill it up with muddy gasoline and expect it to perform well?’" he recalled. “It's a pretty good analogy. Why do we expect the best of ourselves when we're not putting ourselves in an environment that is the best?”

His focus on health and performance is one reason Richter prefers to avoid overused buzzwords like sustainability and conservation. For him, the question isn’t whether we want greener buildings; it’s whether we want better buildings. 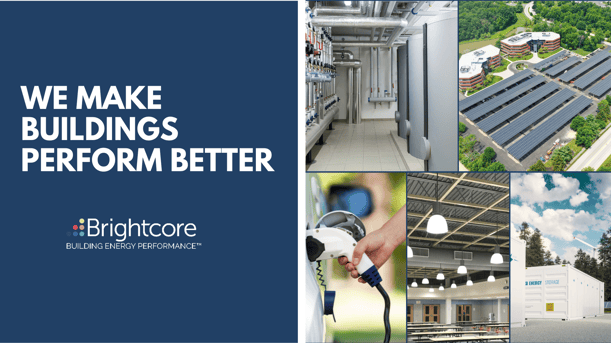 This lens becomes even more useful when turned to institutional rather than individual applications. "LED lights are pretty boring to talk about, but they're also tunable and they last up to 10,000 hours," he explained. "There is so much avoided maintenance with them, and they have the ability to mimic daylight. You have these kids in school – and adults in school – that are learning. Do you want to be in a musty, dark environment that's cold over here and breezy over there and hot over here? When you start changing the building envelope, when you start changing the lighting, it's a better place to live, to learn, to exist.”

Asked about Brightcore’s financing mechanisms, Richter reassured skeptics that these are less about making money for the company – which they often don’t – than they are about helping its customers overcome the obstacles keeping them from installing better infrastructure.

"Why aren't all of our buildings up to the moment with proven technology? It's probably some form of capital hurdle one way or another," he said. "All we care about is structuring this thing so that in the best of circumstances, you can not dip into your pockets for the capital expenses. And maybe it becomes an op expense and you're saving money from day one. Think about that: that's like me coming up and saying, ‘Okay, I'm going to take a carburetor out of your Hummer and instead of getting eight miles to the gallon, you're getting 80 miles to the gallon.’"

The Art of Losing

As the conversation wrapped up, Richter offered one final piece of wisdom for facilities leaders to take away from his hockey career. “Understand how to lose,” he said. “We don't win in life as much as we probably lose, so you better get some value out of those times you miss your mark. Otherwise you'll repeat it.”

Whether you’re a champion athlete or a vice president of facilities management, failure is something worth learning from. "If you want to get somewhere, that journey is never straight, and there are plateaus where you think you're getting nowhere, but then you start to have a breakthrough," Richter concluded. "I think that is an incredibly courageous thing. How many people are willing to do that? How many people look across your portfolio buildings or within your organization and say, 'Hmm, this is going to be painful, but we're going to have to course-correct a little bit here to end up where we need to be'? You’ve got to have an open mind for that."