“Our plan isn’t to get to zero,” said Robert Bell, the university’s chief architect, in a presentation at the Higher Ed Facilities Forum. “We’re likely going to have to have to purchase some carbon offsets, but we want to minimize that as much as possible.”

Bell did not issue this caveat to cast a damper on net-zero initiatives, but to manage expectations: the hard work of decarbonization requires nothing if not cold pragmatism. A public university with 2,300 acres of grounds and 8,297,827 gross square feet across 211 buildings, Miami’s path to net-zero has come with no small amount of sacrifice.

It’s also come with transformative results, including a massive reduction in carbon emissions and tens of millions of dollars in savings. Over the course of his presentation, Bell explained what it took to earn those wins, and what it will take to get (as close as possible to) that magic zero.

As Miami University set out on its sustainability journey more than a decade ago, it developed a utility master plan with three key objectives: simultaneous heating and cooling, the production of heat as well as power, and the implementation of geothermal energy. Reaching these objectives, Bell and his colleagues hoped, would improve the university's redundancy, resiliency, and safety, while reducing chemical usage, improving productivity, and driving down costs.

"The university saved $68m in energy costs over the last decade, even as the campus expanded by almost 2 million sqft."

These are ambitious goals, and Miami University is well on its way to meeting them. Since 2008, the Oxford campus has reduced its carbon per gross square foot by 52 percent, while reducing electricity usage by 41 percent. These figures translated into about $68 million in savings over the last decade, even as the campus expanded its physical footprint by almost 2 million square feet. Approximately $40 million of that $68 million in savings, Bell stressed, was purely the result of energy reductions; the other $20 million came from lower energy costs.

Some of the university’s most ambitious plans still lie ahead. Under the utility master plan, it must convert one of its chillers to a geothermal plant by 2025. By 2026, it will convert its steam plant to a heating hot water system. Then there are the Presidents’ Climate Leadership Commitments, a joint agreement by 350 higher ed institutions to pursue carbon neutrality. Miami University signed the PCLC in 2020, which means, as Bell said, “the clock is ticking:” it has until 2024 to develop its own path to net zero.

"This is getting the whole culture to change on campus."

With a remit to focus on those first two scopes, Bell’s work is cut out for him. “It’s about 78 percent of our total greenhouse gasses that physical facilities has a direct response for,” he said. “This is getting the whole culture to change on campus. We know there's going to be big changes. We know that there's going to be things that people won't like. We're going to have to get education out there. We want to make sure that the curriculum is also coming along with us.” 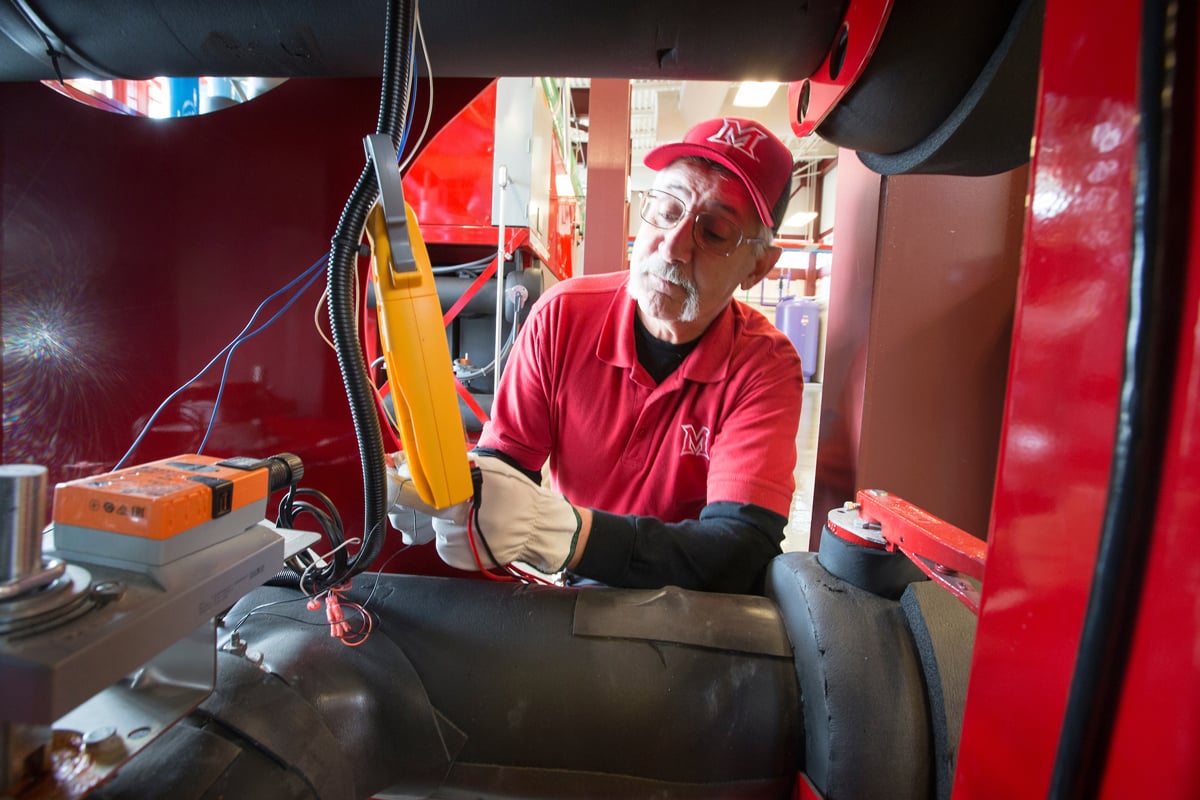 Working with a consultant, Miami University has already identified – and in some cases, ruled out – dozens of decarbonization strategies on both the supply and demand sides, from optimizing space management to lowering hot water temperatures. Since the university already has access to cheap electricity, Bell explained, his team is primarily looking towards solutions that take advantage of this by further electrifying the campus. Conveniently, Miami U has its own substation, allowing it to generate power when prices get too high. Its wealth of land and parking lot space, meanwhile, will provide more than enough acreage for geothermal wells, not to mention solar panels down the line. (For now, Bell said, solar isn’t a financially viable solution.)

Despite the decarbonization plan’s early successes, Bell acknowledged there’s no room for complacency. "The challenge before us is, we've done a great job in reducing the carbon and reducing the energy, reducing the costs, but if we just stay where we're at, all that will go up," he said.

Maintaining that downward trend means forgoing natural gas for the university’s heat, ramping up electricity usage (and eventually transitioning to solar), and slashing operations and maintenance costs as much as possible. “If we do nothing, we will have to purchase offsets. We're looking at reducing that as much as possible. We really don't want to just buy offsets to say we're net-zero.”

As Bell stressed, reaching net-zero takes sacrifice. Miami University’s plan was originally motivated largely by the need to reduce costs, and it indeed took personnel cuts in the campus’s steam plant to get some of those early savings.

Embedding sustainability into the institutional and cultural mindsets helps as well. At Miami University, Bell explained, peak shaving is a team effort: when the campus hits its peak load, it sends out emails asking the community to reduce their electricity usage as much as possible.

On a more micro level, the facilities department solicits continuous improvement ideas in every employee’s performance evaluation, while project managers are specifically tasked with finding new ways to reduce energy consumption. It was thanks to this that his department figured out how to recapture about 75 percent of the heat used from the ice-cooling process in Miami University's ice arena, saving roughly $300,000 in annual operational costs.

“Those are the kind of things that we like to look for: everyone having ideas, everyone coming up with solutions,” Bell said. “It's really taking advantage of what we have at our disposal, making the situations that we have work better for us. That’s it.”

How to Protect Connected Campus Buildings from Cyber Attacks